I am pretty busy finishing other projects – above all, publications connected to The Migration of Faith: Clerical Exile in Late Antiquity and our project database – so at the moment my research on Helena is still a little light touch. However, to get me started thinking about Helena, this past summer I have read a couple of novels whose protagonist she is.

One of them is (relatively) famous: Evelyn Waugh’s Helena.

This book – Waugh’s favourite, published in 1950 – has attracted some attention in academic circles. For example, Antonina Harbus discusses Waugh’s Helena in her fantastic Helena of Britain in Medieval Legend.

The other one is less well known, at least, I suspect, in academic circles: Marion Zimmer Bradley’s Priestess of Avalon, the last of her Avalon series, published posthumously by her co-writer Diana L. Paxson (2001). 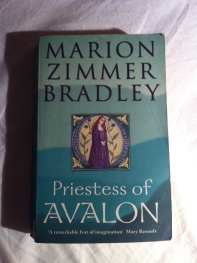 Both novels follow, in a rather biographical fashion, Helena’s lifecycle (Waugh starts with Helena meeting Constantius, father of her son Constantine; Zimmer Bradley/Paxson, when she is ten years old). They spend most time with the period of her life that historians know nothing about, her relationship with Constantius and the time she spent after Constantius left her and before Constantine brought her back to court. In fact, in the Introduction to Helena Waugh says that what he found most interesting about Helena was that ‘practically nothing is known about her’ (all Waugh quotes below are from his Introduction). The historical biographer sighs and watches with envy how the novelists fill the void.

Both novels locate Helena’s origin in Britain, as daughter of a native British king, based in Colchester, like so many of the medieval legends analysed by Harbus. Nonetheless, the meanings they give to Helena’s life are almost completely opposed. Waugh, the converted catholic, was intensely interested in Helena’s Christianity. He saw Christianity as a religion with a ‘sense of actuality’, a religion that was tangible (through the Holy Cross relic Helena found) and that could be located in history and in place (the Holy Land). His Helena always demands ‘straight answers to straight questions’. This is unlike the ‘Asiatic cults’ predominant in the Roman empire at the time (by which he means mainly Mithraism), which were just interested in allegory, metaphor and symbolism.  As a result, Waugh doesn’t describe or even mention Helena’s conversion to Christianity, because it’s just so obviously logical.

By contrast, Zimmer Bradley and Paxson are intensely interested in Helena’s paganism, to the extent that, in their book, she never converts. The Avalon series explores a whole world of British mythical tradition, and, importantly, how this world has been shaped by women. As a young girl, their Helena becomes a priestess of the mother goddess on the mythical island of Avalon. Due to a series of badly understood visions and prophecies, she has to leave the island to live with Constantius and give birth to a ‘prophecy child’, Constantine. At this point the narrative connects to Roman history with all the known milestones, but Helena never forgets she is a priestess. Funnily enough, for Zimmer Bradley/Paxson this also means having a ‘sense of actuality’, to be in tune with place and time. While their Helena does not find the true Cross (which is probably more historically accurate than Waugh’s version), she physically ‘feels’ the historical dimension of the Holy Land and the female current that runs through it (for example, through Mary giving birth to Jesus in a cave in Bethlehem).

I have to say that, while Waugh’s book undoubtedly is the better literature, I did not really like it. At a book club I organised back in early summer, it became clear why. Someone pointed out that there are no real relationships in the book, everyone seems cold and detached, including Helena. The following discussion revealed that this may be because Waugh based his characters on the British aristocracy in whose circles he was moving. With Helena, he tried to connect Britain to the Holy Places of Christianity, hence it was important to him she was British. As a result, the tone of the book is not just a little colonial. For example, Illyria (the Balkans, which produced emperor after emperor in late antiquity) is continuously described as a Barbarian region and compared unfavourably with the much more civilised Britain.

Priestess of Avalon, also because it’s held in the first person, is a much more immediate tale. It’s also quite impressively well researched. While its depiction of native religions in the Roman empire is somewhat dated, I came across quite a few things I knew or have seen in other contexts, but would never have connected to Helena. For example, Helena is associated, not only by this book actually, with a Celtic goddess named Elen (it’s never quite clear in the book whether Helena is a priestess or a goddess, but it doesn’t really matter, because all women are seen as connected through the divine female spirit). Like the goddess, Helena is always accompanied by a dog, quite like a woman represented on what was probably a Roman votive stone to a mother goddess found at Hadrian’s Wall (now at Tullie House in Carlisle; a replica stands in Bowness-on-Solway at the Western end of Hadrian’s Wall).

When Helena travels to mainland Europe with Constantius, they, like many other travellers at the time, took the route via the mouth of the Schelde. Here, in a place called Ganuenta, Helena encounters a temple dedicated to Nehalennia. This is a historical place, dedicated to a mother goddess venerated by the people who lived in this region in Roman times. Due to geological changes to the mouth of the Schelde at the end of antiquity, Ganuenta is long gone, but a replica of the temple now stands at Colijnsplaat, in the Dutch province of Zeeland. It is here that in the 1970s a large number of votives stones were found in the Oosterschelde by local fishermen (now in the Rijksmuseum van Oudheden in Leiden). They testify to the role Nehalennia played in the connection between Britain and mainland Europe in this period, with many traders, from as far away as London, Trier and Cologne, envoking protection of the Goddess for a safe crossing to Britain.

Zimmer Bradley and Paxson were clearly inspired by the figure of Nehalennia not only because Helena is an (imperfect) anagram of Nehalennia, but also because Nehalennia, as we know from the spectacular Oosterschelde find, was usually represented with a dog.

Nehalennia sacrifice at the Archeon, Summer 2015 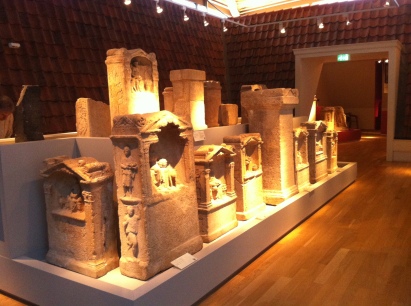 Votive stones of Nehalennia, found in the Oosterschelde, Rijksmuseum Leiden. 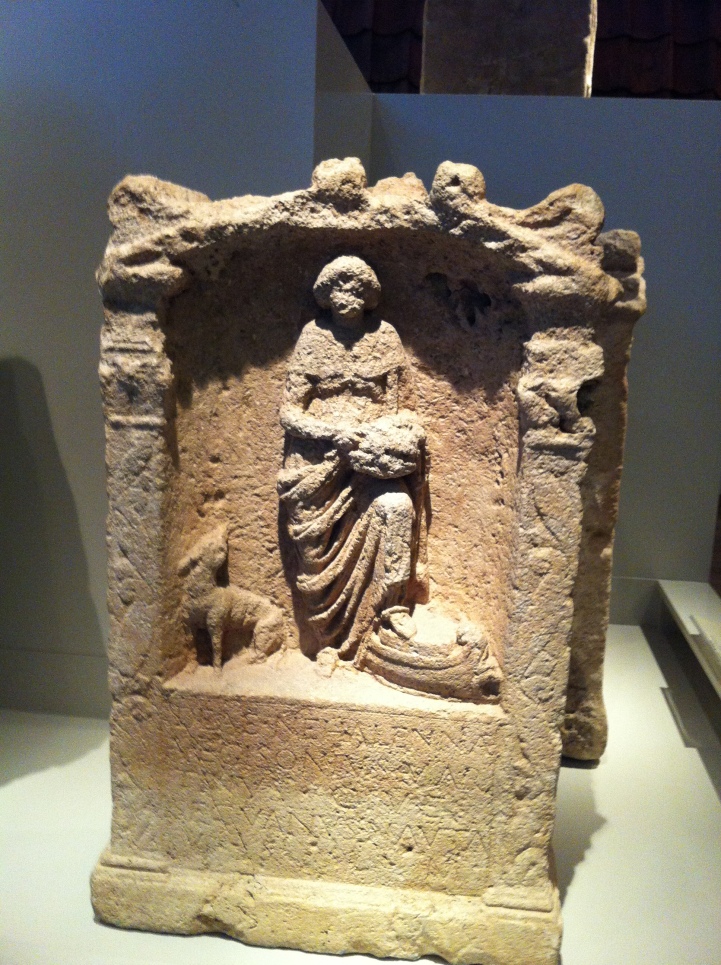 Votive stone for Nehalennia, from Ganuenta, now in Rijksmuseum Leiden.

It was lovely to see these different aspects of religion from the Northern parts of the Roman empire strung together in Priestess of Avalon. It was doubly lovely, because I’ve spent most of my childhood summers near Colijnsplaat and only recently attended the re-enactment of a (flower) sacrifice to Nehalennia at the Archeon near Leiden, performed by a couple of priestesses.

I wasn’t aware that I was walking in the footsteps of Helena there or then, but I suspect this will be the story of Writing Helena. Everything will somehow become connected to The Book…